Sera on the podium at City of Melbourne Titles

The 32nd City of Melbourne Titles was held at the Go-Kart Club of Victoria on August 12-14, 2016, where David Sera claimed a podium finish in the strongly contested TAG Light category.

Drivers were treated to practice on Friday with Sera placing his Deadly / IAME X30 package around the top ten but not setting the world on fire. “I was able to run through a good testing program today which entailed different variations in sprockets, exhaust flexes & kart setup. Without Daniel Rochford being present today, I’ve had to try as much as I can to help as both this weekend” 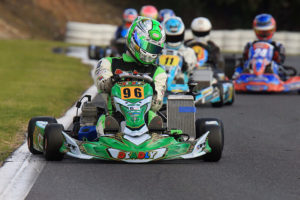 Saturday’s first on-track session was the all-important qualifying with 35 drivers entered for TAG Light. Sitting just outside the top ten for the early part of the eight minute qualifying, Sera produced some quick laps in the final stages to move into second position and seal himself a front row starting position for the opening two heat races. “I timed my quickest laps very late in the session. I got stuck behind some slower karts early on, so I had to be patient and time the run of the new tyres. The outside starting position is actually quite good here at Todd Road, so I feel we have a good shot at it.”

Heat one was held on Saturday afternoon and the opening heat race tussle between current TAG Light Australian Champion Brad Jenner and Sera brought spectators to the fence. The two drivers traded the top two positions on multiple occasions throughout the ten-lap race, with Jenner coming out on top by the barest of margins.

Heat two saw drivers greeted with wet conditions after Melbourne’s overnight rain. This played into the hands of Sera, as he used every ounce of his 20+ year career to good use to drive away from the field early on before closing out the victory by just over one second. After the two heat race results of a second and first place, this handed Sera a pole position for the pre-final. 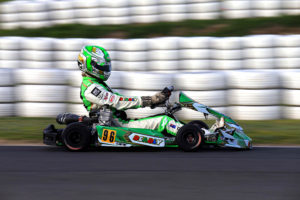 Jenner got the jump on the way to turn one with Sera nestled into second position, but that didn’t last long with Wayne Bourke making a pass for second on the opening lap. With the parity in engines (Rotax vs. IAME X30) working for drivers in different parts of the circuit, Sera had to bide his time behind Bourke before pouncing just after half race distance of the twelve lap journey. By this stage, Jenner had pulled away to a race winning lead with Sera coming home in second place and fellow X30 competitor Zac Soutar in third.

After making some small adjustments to his Deadly kart in the lead up to the main event sixteen lap final, Sera knew he had to pounce early on the start to try dictate terms from the front and not let Brad Jenner out to a comfortable lead again. As the strong 35-kart field received the green light it was Jenner who got around turn one in first place, with Sera on his bumper. Having sat behind the current Australian Champion for the first five laps waiting for an opportunity to arise, Sera couldn’t match the speed of Jenner and had to settle for second place at the close of the event. Teammate Daniel Rochford worked hard over the weekend to round out the podium in third place.

“In the end we didn’t have the speed to run with Brad this weekend. The Rotax engine seemed to be better suited to Todd Road and I just couldn’t match him in some critical sections of the circuit. Some consolation is the fact we were the first X30 home and it proved a good weekend with Dan coming home in third. I think we will be in good shape for the final round of the AKC Championships next month.”

Sera would like to thank his loyal supporters for their continued efforts in providing him the best equipment; DPE Kart Technology, Deadly Karts, J&A Kart Tuning, 360fly, Bell Helmets & Xzuit.