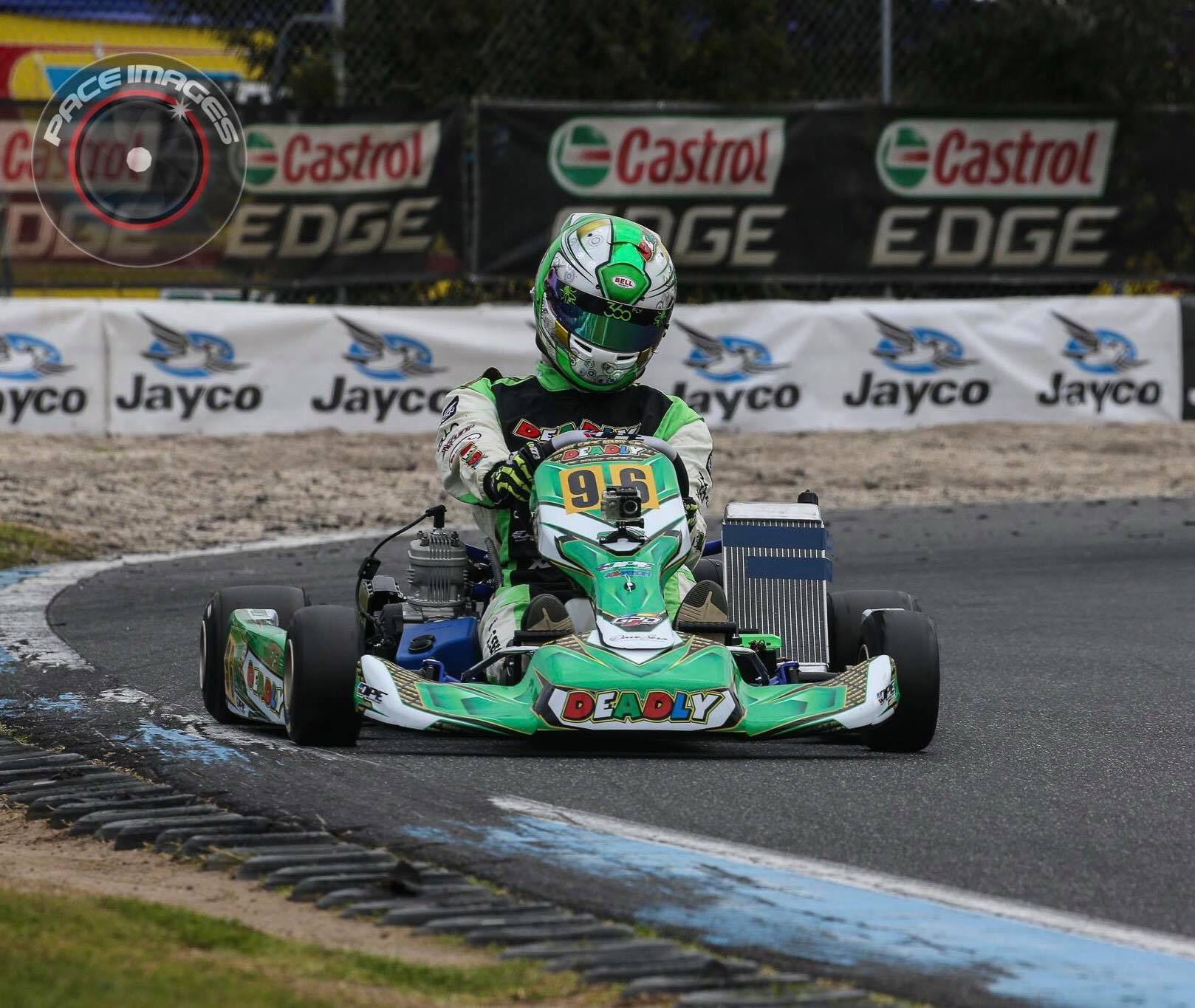 Sera finishes on the podium at the AKC Finale

At the final round of the Australian Kart Championships, David Sera has claimed third place in the hotly contested X30 category.

Being set at the picturesque Go-Kart Club of Victoria on September 1st-3rd, Sera was having his final hit out driving DPE Kart Technologies new X5 development chassis at a track he’s won at on countless occasions.

During free practice on Friday Sera ended the day with the sixth quickest time after earlier topping a practice session.

“We’re in a much better position on Friday than we’ve been at previous rounds. At this stage we’re still learning and getting our heads around what works and what doesn’t.” said Sera.

Saturday morning’s qualifying session was held in overcast conditions and the track was quick. Although Sera posted a faster lap than he’d done to date, the time was only good enough for fifth position overall.

“Our biggest issue this year has been qualifying and not being able to get a big new tyre advantage like some other drivers. To be fifth has us in the race and I’m confident in our race package.”

Heat results of fourth, seventh, third and DNS (reed pedal broke on the out lap) gave Sera a starting position of twelfth for the 20 lap final.

With nothing to lose in the last race of the championship, Sera made a bold move into turn one on the opening lap and found his way into seventh position. From there on in he set about chasing the drivers in front where he found his way past championship leader Joshua Car in fifth.

Nearing half race distance, Sera was into fourth and on a charge to the three drivers in front also towing also championship combatants Car and Marc Tulloch. As the laps were counting down, Sera dived into third place with a pass on local driver Matthew Beninca at turn one. He then chased down first and second but a costly passing attempt on second place ruined his run and hampered the proceeding drivers.

A third place finish was the end result for Sera and his X5, which was some consolation after a tough year.

“I’m not normally one to cheer home a third place finish, but I think in this field to drive through from 12th to 3rd was a good effort. Our kart this weekend showed the speed to win, but a costly DNS in heat four hurt our chances. A massive thanks must go to my mechanic Brad Anderson who has given up his time to help support my racing this year.”

As always there’s a team behind the driver who makes the weekend happen and we’d like to thank; DPE Kart Technology, Brad Anderson, J&A Tuning, B Sport and Sera Karts.

Sera’s next race will be abroad driving in unfamiliar territory in DD2 at the Taiwan National Championships at the end of September.