The SDD team will embark on the 2019 South Australian Championships this coming weekend at the Southern Kart Club in Bolivar, with five drivers looking to assert themselves on the podium at one of the final blue chip events for the year.

William Calleja will be full of confidence in Cadet 9 after winning the most recent race event at the Victorian Country Series and he’ll be joined by local SA driver Riley Harrison who’ll be looking to utilise his home track advantage. For Calleja, this will be his first time at the circuit, so working with a teammate he’ll hope to fast track his progress. Harrison on the other hand, will be trying to convert his knowledge of the Bolivar circuit into a podium after being ever so close at Wimmera last weekend for the Victorian Country Series.

Miley Miller will lead the attack in Cadet 12 where she will be looking to build on her recent speed at the City of Melbourne Titles and Australian Kart Championships where Miller qualified on the front row and was the first female to win a race in the category. Miller will also see the Bolivar circuit for the first time on Friday morning, so the aim will be to learn throughout practice before setting her sights on a top 5 in qualifying. Miley has been a driver on a mission over the last three months, so we are hopeful of a strong result.

KA4 Light will see Marcus Pisani in action vying for his first State Championship where he will have strong competition from the local contingent of drivers. Pisani has shown speed throughout 2019 which has seen the SDD driver qualify fastest at two Australian Championship events and a podium finish in Monarto.

18-time Australian Champion David Sera will have his first Australian race in 2019 in X30 this weekend where he’ll line up alongside cousin James, Supercars driver Nick Percat and previous AKC round winner Jaiden Pope. Sera will drive his own brand of kart loaned by Leigh Nicolaou who has shown glimpses of pace in previous rounds. Sera is using the weekend to help coach his drivers with the ever-changing track conditions hard to gauge for younger drivers.

“It’s really exciting to be back in a race kart ahead of the SA Champs. Bolivar has always been one of my favourite circuits and after coaching kids all year, this was a good opportunity to have a race myself. I’m confident our junior drivers can handle the tricky track conditions and our aim is to be carrying some silverware back to Melbourne!” said Sera.

Qualifying takes place on Saturday morning followed by the heat racing on Saturday afternoon and finals on Sunday.

The SDD team would like to take the opportunity to thank its supporters; Melbourne Kart Centre, Erebus Motorsport & J&A Tuning for their continued support. 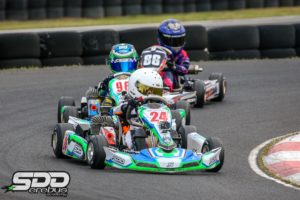